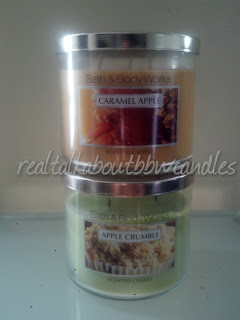 
As you all know, I'm not a fan of the sweet/bakery/gourmand smells at all but these two jumped out at me. Perhaps because they were both spiced apple scents, which I love for fall. With that said, I got these two with the intention of burning them near the beginning of fall, before I start burning my fall staple, Leaves. However curiosity set in and I wound up burning them both earlier than I intended.

All T ALL SHADE...this is the worst burning candle EVER! It's a hot HOT MESS! It's by far the most RATCHET candle that I have ever gotten. Look at this ridiculousness.... 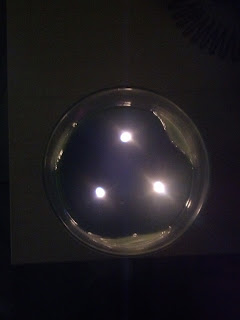 The wicks are skinny and pitiful...WIMPY WIMPY WIMPY!!! They get so stubby that the flames are trying their best to stay alive and not drown. And as you can see above, it canyons like crazy. It takes forever to get a decent even wax pool, if you're lucky. And the wax pool is an icky booger greenish brown...VEEERY ATTRACTIVE! But the real ratchetness happens after you blow it out. The wicks get ashy white crap on the top and wax is all kinds of uneven and wavy and leaves a circle of residue on the inside of the tumbler. ﻿

Now on the flip side, AC smells AMAZING!!!!! The throw is PERFECTION! It's not cloying nor will it make you fall into a diabetic coma. It's soooo warm and inviting and you just feel cozy when you smell it; it's one of those throws/scents that you just feel wrapped and enveloped in like a warm blanket. And the smell lingers for HOURS! I once burned it at night and I swear I smelled it the next morning! Thank god it's a scent that I enjoy!

Now the scent...the scent is very true to its note description. You do get that fresh crisp baked green apple note (Macintosh..not so much) and my nose could be playing tricks on me, but I swear I get a green pear note as well. The nutmeg note is pretty dominant and overpowers the cinnamon, which is not a spicy red hot cinnamon but rather a cinnamon sugar. Lastly there's the vanilla crumble note. Now most people (myself included) are turned off by the very mention of vanilla. But the vanilla in AC is different; it's not a creamy vanilla, nor an herbal vanilla bean but rather  a vanilla extract that's been baked into something. And there's almost buttery smell that accompanies the vanilla crumble note that does make AC smell authentically bakery-ish.

Performance-wise, unlike it's counterpart AC, it is PERFECTION! Nice sturdy wicks, consistently high dancing flames and deep even wax pools. However, unlike AC, the throw isn't very strong; it's kinda medium-ish. I don't get the same feeling of being wrapped up in the smell. It has what I would describe as a "guest friendly" throw.

Now the scent...like AC, the smell is consistent with the given notes. Moreover it's also not cloying or sickeningly sweet. It smells legitimately like a fresh caramel apple being sold at a fair. You do get a sweet fresh crisp apple note but, like an actual caramel apple, it's covered up rather nicely by the other notes. The brown sugar note gives it a dark rich sweetness and the nutmeg, though slight, kinda perks up and gives the scent a little kick. I get the Anjou (pronounced "ahn-juu) pear note which gives the apple note an added freshness, richness and creaminess. And it's all wrapped together in that creamy caramel note. And, it could just be my nose, but I get a nutty note, like crushed peanuts. To me, this smells like a peanut covered caramel apple.

Now often, this is compared to Cider Lane as they share similar notes. However there is a major difference between the two. Caramel Apple lacks the "spice" note that Cider Lane has; Caramel Apple is more nutmeg-y and Cider Lane is more cinnamon-y. Moreover the type of caramel notes in each scent is different; Caramel Apple's caramel is more of a creamy, chewy candy-like caramel and Cider Lane's caramel is more of sugar sweet liquid-y caramel, like a dip or syrup you put on ice cream or in a Starbucks-esque coffee/latte drink.

In conclusion..I think these two were the stars of the Semi Annual Sale and consider yourself lucky if you were able to get your hands on them both as who knows when we'll see them again; I myself wished that I bought more than one of each. Now I will rarely ever say this, but I believe that these two scents are worth finding on Amazon (not Evil-bay); if you do, make sure you find last year's version of AC with the Arial font on the label. If you can't be bothered with that, there are duo wallflower bulb packs of both currently available on the website for $12.50. But if you'd rather burn a candle instead, I say go with the next best thing to these two scents...Cider Doughnuts and Cider Lane. 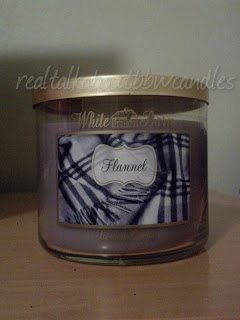