RANT OF THE DAY: The Case of the Apple Cinnamon Cider Mystery 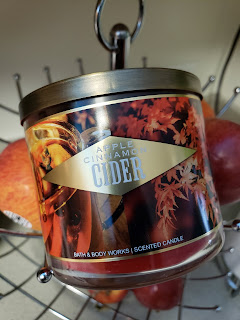 This candle has caused quite of bit of intrigue in the candle community.

It mysteriously popped up online with absolutely no fanfare well after all the fall candles tested and were released. Then it disappeared!

Then it kinda floated around the online ether like a ghost and you could only get a glimpse of it if you searched for it on Google which lead you to it on BBW's website but you couldn't find it if you looked directly on the website. Many people (myself included) did this and bought it during the B2G2 sale.

Now it seems to have stuck around and is even sneaking into the stores but the mystery and intrigue over this candle hasn't ended for there is a new conundrum - what does it smell like?

Before ACC was available to the masses, there were 3 distinct camps of theories -

Once folks got their hands on this badboi, reviews on social media were all over the place. As usual, very few (if any) were reliable or trustworthy so I had to sniff it for myself. Now like I said earlier, I bought it online during the B2G2 sale and the packaged arrived while I was out of town on vacation. When I got back home, the first thing I did was pick up my package and give ACC a big huff.

Having finally sniffed it, I was able to come to my own conclusions -

Now a few people on social media mentioned that ACC smelled like a certain particular candle and I refused to believe it because it just sounded too random. However after I sniffed ACC, I had to concede to the general consesus - ACC smells almost exactly like..wait for it...Spiced Pomegranate Cider

Take out the pomegranate and the blackberry and you basically got ACC!

The blend itself is pretty straitforward. You get sweet mulled apple cider heavily spiced with cinnamon and a little star anise with maybe a tiny hit of vanilla..that's it. Again, Spiced Pomegranate Cider without the pomegranate.

There are 3 things wrong with ACC
And that's what's so dissapointing about this candle. All the intrigue, all the buildup and all the hype..for what? A boring scent that smells so strikingly similar to a pre-existing candle. Why go thru the all that trouble to invent a scent that smells like something that has already been out already? Wouldn't it have just been easier just to bring back SPC? Or better yet, bring back a cider scent that actually smells good like Spiced Cider or Spiced Pumpkin Cider?