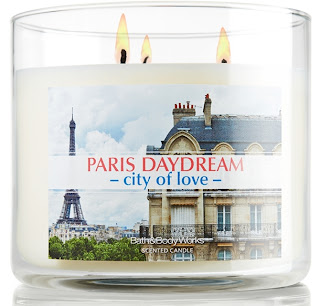 image source: Bath & Body Works
Product: candle & wallflower
Area used in: main bedroom
Time Period: February - April
Description: Our "Oh, so French" blend of watery notes, moss and mandarin. Imagine a day by the Seine in the city of love.
*this is an old repackage of the same candle in old French inspired line which was a repackage of the old Good Life aromatherapy scent called “Flirt” for winter

This was part of line of scents called the Around the Globe/Destination line- Morocco Market (cheap incense and patchouli), New York New York (moldy apples), London Calling (Lipton lemon ice tea), Caribbean Escape ( fruity scented crayons) and Meet me in Tahiti (vanilla and musk) New York and Morocco were discontinued for being sucky.
Honestly, I bought this as an experiment. Many BBW fans  say that this and Oceanside smell exactly alike….I didn't think they did...that is until I finally burned Oceanside and YES they totally do smell almost exactly alike!
PD is a little unusual but in a good way. First off, completely disregard the notes in the descriptions cuz this doesn’t smell like any of that…well, maybe the mandarin part but that's it. It does however smell like the old notes; muguet, freesia, citrus and sandalwood. The muguet/lily of the valley and freesia, though faint, gives it a dewy floral scent and the sandalwood makes it woody and musky which for some reason intensifies the more the candle is burned.  I honestly don't know what BBW was thinking with this scent for it does not remind me of Paris at all!!! I think BBW liked this scent too much to let it go so they simply slapped a random name to it. There is something about this that people could describe as "cologney"; in fact the scent (especially from the bulbs) smells just like Hugo Boss’ Boss cologne, which I like. Long story short, I did eventually get bored with PD and was glad when it ran out.
I will say that the candle burned fabulously though the wax color did change ever so slightly. Throw-wise, I'd say this was medium-ish....thank god! I don't think I could've handled PD if it was super strong. The bulbs were disappointing; you had to hover over the wallflower and snort to smell anything and, like most of the bulbs with clear oil, they changed into an icky yellowish brown.
To quote Littleballadeer, "Not a repurch".

*this will appear with London, Tahiti, London, and Caribbean in a new Destination line with 4 new scents this summer