- February 07, 2016
The bf and I decided to take a trip out to GSP to advatage of the 2/24 sale and to sniff/buy some new candles. They didn't have the Southern/80's wallpaper collection (oh well) or the Hawaiian collection (again, oh well) and Mediterranean Melon (once again, oh well) was the only scent missing from the Ciao Italy collection.

Spring - another amazing Slatkin era scent that I love that has made a grand entrance after an unexcusably long absence. But again, much like my bae, there's something different. Again, maybe its due to cheaper oils but it just doesn't have the same robustness and vibrancy. But other than that, it smells the same.

Golden Grapefruit - unfortunately this is not Pomelo Grapefruit but it's quite similar - think PG but without the mouthpuckering sourness and juiciness and added intense sweetness, like grapefruit flavored hard candy. And there's an added tartness that smells like lemon zest/lemon peel. I don't get blackcurrant at all. They really should've just brought back Pomelo Grapefruit cuz that's so much better.

Cashmere & Oak - so right off the bat, this is definitely a "mandle" and a very familiar smelling one. At first sniff I thought it was The Original...it definitely isn't. Then I thought maybe Be Daring... close but no cigar. What I think it might be as an unfamiliar mandle calles Alpine Suede based off of the men's signature body care. Unfortunately there was no candle of it but the bodycare was there and after sniffing it, I'm pretty sure that's what this scent is. It's a very wood heavy scent - some oak, some sandalwood, maybe some some cedar too. I also get hint of a vetiver. I also get some pine/pine needles this gives this scent a fresh alpiney vibe. All in all, its very similar to The Original but its much better. As much as I like this scent, I think its an odd choice for spring as it does seem more like a late fall/winter type scent.


And now for the new candles in the Ciao Italy collection...

Sand & Sea - this one is really strange! It has a cologney mandle type vibe but I can't say that I like it. It has an intense sage note which I usually like in home fragrance but not in this one. It's really sharp and does not mix with whatever other notes are in this. There's definitely some musk action and some earthy dirty notes and salt - on the whole it kinda smells like a man's musty sea salt encrusted swimming shorts covered in sand and kelp. It definitely lives up to its name!

Coconut Sandalwood - oh boy, what a waste of a scent this is! Why does this exist?! Tiki Beach is already in this collection, Mahogany Coconut is in other and then Coconut Leaves is yet another. And it's not like this is a kickass coconut scent cuz it ain't it, in fact this may be the worst one. First of all, there's more sandalwood than anything else and it just gives this scent ol lady perfumey vibe...and who likes sandalwood?! It almost smells like Vanilla Sandalwood but more perfumey. There's a Vanilla Coconut like coconut note that's surprisingly light but it doesn't mix well with that damn sandalwood. Think a super musky perfumey feminine version of Mahogany Coconut..which isn't as intriguing and pleasant as it may sound!

Indigo Sky - yep, so this is definitely Baltic Black Pearl from Intrigue & Opulence. It's an odd yet pleasant high end cologney scent, a little too high end for this collection. It has a vaguely oceanic vibe like Oceanside and Sea to Santorini. And there's an interesting mix of mandle type notes - sandalwood, vetiver, and black pepper. On top of that, there's an odd but pleasant powdery orange blossom note. And I usually loathe amber in home fragrance but I like it in this; the amber gives it a very sensual and exotic Eastern vibe. They should've kept the name "Black Pearl" cuz it's more fitting; Indigo Sky, not so much!

Seaside Citrus - time to throw some shade. So I've seen at least 4 or 5 different people review this scent and all of them said all kinds of things about it except the obvious... IT'S A FRIGGIN REPACKAGE!!! And it's not like it's a repackage of something ancient but something relative recent - SUNSHINE aka LEMON VERBENA!!! They even have the EXACT SAME NOTES!!! There's a  very slight difference - the citrusy tartness from the verbena is more prominent but other than that, its pretty much the same.

Sundrenched Mango - Ok so I sniffed this one at 2 different stores and there were definitely two different versions. One version is a repackage of last year's Guava Colada...why I don't know. The second (and decidedly better) version is a repackage of Barcelona ~ Mandarin & Mosaics aka Caribbean Salsa. It a juicy and sweet melange of fruit notes - mango, peach, orange, pineapple all sweetened with a hint of creamy vanilla.

These are what I wound up getting! 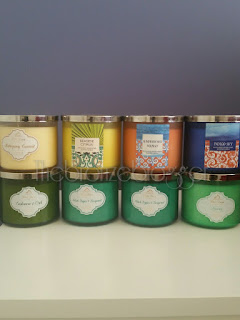