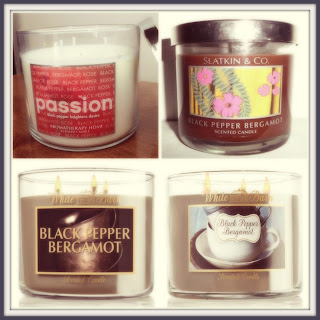 So as y'all know, after a 2 year absence, my bae is finally back in action...and I for one could not be happier! Granted I'm a little annoyed that it's a WB exclusive but hey beggers can't be choosers right?! I had two old BPB from '13 left, one of which I burned halfway thru last fall. And you could not find this damned candle anywhere, lord knows a bitch has been searching! So when I got wind that BPB was coming back as an exclusive and then finally seeing it for myself in person in the store (I did have a littel freak out cuz I didn't see it and a SA pointed it out to me) I was in my happy place and twerked with joy!

I sweartagawd, we both came at the exact same time!

You know that music that always plays with man and woman running into each others arms in a meadow? We both heard that music we sniffed BPB together!

We were hooked from that instant! Even after it disappeared in stores, we stocked up and burned thru them with reckless abandon almost all year round. We did eventually burn thru our stash and we both patiently waited for it to make its reappearance next fall.

Fast forward to fall 2013. BPB is back in action. The scent is significantly weaker than the year before but who cares, I was just glad it was back regardless of strength. My bf and I were like crack heads in need of fix; we'd go to the store wild eyed and foaming at the mouth. Every single time we went to BBW , we would ALWAYS get BPB! Much to my delight, BPB stuck around well into winter. There was a rumor that BPB as well as Mahogany Teakwood were sticking around as core scents all year round; the fact that it stuck around so long seemed to confirm this fact...

Fast forward that February, the butt end of SAS. My bf and I went to the store for the sole reason of picking up more BPB. Imagine my shock and dismay when I went inside and didn't see any! I ran around like a madmen determined to find at least one hidden somewhere but nope! Disappointed but still determined, I immediately went on my phone to the website in order to make an online order as I had just seen them that morning. Of course you already know what happened...they were GONE!!! I was almost in tears. Though I still held on to the hope that it would be back the following fall

As I mentioned earlier, eventually only had two BPBs left and I searched ardently online but to not avail. Then the candles god granted this lowly mortal a boon - BPB was back, we were finally reunited! The heavens parted, spilling golden beams upon the; angels sang, birds took flight, blossoms bloomed and there above me was a rainbow! I was not longer forsaken, no longer had to do without! All was right with the world!

So you may be wondering, is BPB worth the hype? And my answer to you is..HELL F***ING YES!!!