Dear SAs...NOBODY is mad at you for not selling new candles. We get it, it's an edict from corporate that you must follow. When and if you hear anyone complain about this on social media, we are not mad at yall but rather the stupid things corporate makes y'all do! 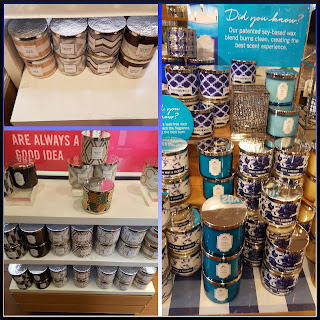 Let's start with the House of Blues candles. as per usual, I will only talk about the new candles

Honey & Vanilla - so right off the bat, this is NOT a repackage of Honey & Tangerine or Sweet Honey Bee; as far as I can tell, this is a completely new scent...and it's not what you expect. I LOATHE vanilla scents and I'm not a huge fan of honey scents either so I was expecting to utterly and completely hate this one but I gotta say I was pleasantly surprised. So despite what the name suggests, there is absolutely no honey and the tinge of vanilla that's there is not the vanilla you're used to from BBW. As a whole, this scents smells like straightup melted white chocolate, like something you'd dip strawberries into; it almost has a Nestle's Crunch Cookies and Cream vibe to it. The vanilla is not vanilla/tonka bean or vanilla powdered sugar or marshmallow but almost milky; think French Vanilla coffee creamer. All in all, it's a very rich, indulgent and decadent scent; it's a good curl up in your blanket and read a book type scent. I'm a little annoyed at the name and marketing as it's a total misnomer; it should've been something like "Milk and Sugar" or "White Chocolate & Creme" or "French Vanilla White Mocha". Honey and Vanilla does it no justice.

Fresh Mint & Coconut - Again this was another scent that I was not expecting to like but it totally surprised me. And again, the name totally threw/turned me off - mint and coconut are not notes that I would think go together...then again I did like Lavender Coconut. Anyway, the scent is a little more complex than the basic name suggests - you do get mint, think freshly picked and slightly muddled garden mint/peppermint which gives the blend a freshness and yet it's surprisingly not very menthol-y. And you did get the coconut but it's more like coconut water as opposed to meat or milk. And there are some green grassy notes behind the mint that almost gives the scent a Green Grass/Snap Peas type vibe. Lastly, there is a faint ozonic seawater/sea air/sea spray vibe chillin in the background. I would say think of this as a summer version of Renew & Refresh, same type vibe but with coconut water. Again, BAD MARKETING. This should've been called something vague and conceptual like "Summer Fun" or "Sea Breeze" "Beach Vibes" or "Beach Shore"and put in the Spa Day collection or one of the beachy ones.

Vanilla Birch - this one seems to have confused a lot of people, myself included.I thought for sure it would be Peace ~ Iced Vanilla Woods as it was repackaged as "White Birch" last fall. There was also a Vanilla Birchwood back in the Slatkin days but after sniffing this, this can not possibly be that. Right of the bat, this is most certainly is NOT Wild Madagascar Vanilla as people have been saying on social media. After finally sniffing this, I gotta say I kinda surprised if not disappointed that no one figured this out except for Tinadivalicious who talked about it in his recent video   and I am cosigning. Vanilla Birch is a straightup repackage with a twist of Wine Cellar aka Smoked Berries & Incense..without a doubt, there's no denying it, I'm goin down swingin to defend myself on this one. I even sniffed other ones to make sure I wasnt just sniffing a mismatched lid but nope, they all smelled like Wine Cellar. VB is a little lighter, a little less robust and it's more woods than fruit but that's about it. I don't really understand how a spicy fruity wine scent all of a sudden becomes a woody vanilla scent..there's NO vanilla aspect at all. . Once a-friggin-gain, BAD MARKETING! They could've called this "Wine & Spice" "Pomegranate & Saffron/Patchouli" "Red Fruit & Oak" ..hello friggin rename it SMOKED BERRIES & INCENSE!!!

Bourbon Sea Salt Caramel - I initially wrote this off as yet another generic savory ooey gooey sticky sweet diabetic coma inducing caramel scent...it is kinda. It kinda gives me a Hot Buttered Rum vibe as it a rich caramel scent with a hint of salty savoriness and a splash of sweet dark liquor...although I'm hesitant to see it's a repackage/repackage with a twist. For the sake of argument, I'll just say it's new but familiar. And you do get a boozy kick that separates it from all of the other caramel scents over the years. And I dunno if my nose is trippin, but I swear I got a faint hint of almond but not like roasted almonds or amaretto; it's smells like the generic almond scented hand soap you get from dollar stores..which makes me think this may be a repackage of Toffee Glazed Popcorn/Toffee Crunch from 2012. I didn't like that scent nor do I really remember some another candle connoisseur out there will have to prove me right or wrong.

Sweet Spearmint - so there was a failed test scent of the same name in the Fresh Picked collection back in spring 2014. I'm pleased as punch to report that this is the same scent albeit lighter..which is par for the course with BBW. I stupidly passed on this one when I first moved up here and saw it in GSP back when it was still a test store so I'm glad it's back. The scent is straightforward, it's literally sweet spearmint. Think of this as a spring/summer version of Twisted Peppermint, Twisted Peppermint's twin. You get a Doublemint Gum-esque spearmint note, the same spearmint note you get in Winter Mint & Spruce. It's cooling and refreshing and ever so slightly sharp. And it's sweetened and toned by a sugared vanilla bean note, not as creamy as it portrays itself to be. And that's it. This would make a nice cool you down on a hot spring/summer down kinda scent. Again, BAD MARKETING..that seems to be a friggin theme! Why exactly makes this scent "mixed materials"? Shouldn't the name suggest that? "Mint & Sugar" or "Vanilla Spearmint" Personally this scent doesn't belong and should've been in either the Lattice or Hit Refresh or Summer Fresh collection.